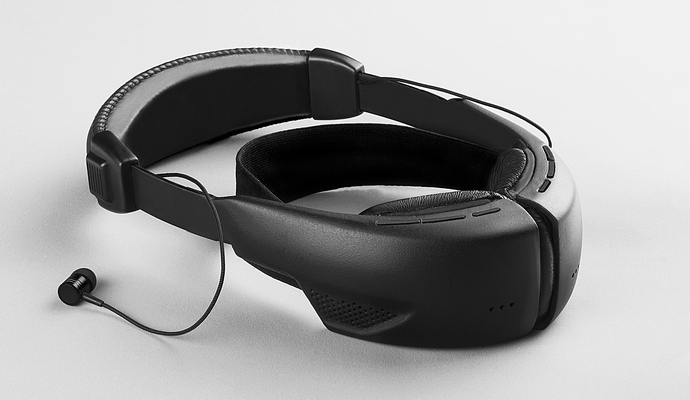 Abizarre black mask that blocks the sound of its wearer’s voice so nearby listeners can’t hear could be the latest way to protect your private phone calls – as well as silencing loudmouth colleagues.

The Hushme, a device that fits around its user’s mouth and connects to a mobile for phone calls, claims to be able to mute a caller’s speech to anyone in their vicinity.

Although marketed as a product to keep conversations private, it could also be a godsend for anyone fed up of listening to their colleague on the next desk prattle on, or commuters sick of that one train passenger who doesn’t understand the meaning of quiet carriage.

The device is currently a prototype CREDIT: HUSHME

The Hushme, which was showcased at last week’s Consumer Electronics Show, connects to a phone via Bluetooth and includes a pair of earbuds for listening. But the core of the technology is the microphone-enabled mask that snaps together in front of a user’s mouth.

As well as insulating voice, users can pick one of several recordings to drown out any remaining sound leakage. They include staples such as wind, ocean and rain, animal sounds like birds, monkeys and squirrels, but also the sound of Darth Vader’s heavy breathing or R2-D2’s bleeps.

A promotional video for the Hushme shows an office worker casually wearing the device around his neck like a set of over-ear headphones, although it is almost certain to draw some odd looks if used in public.

It can be worn round the neck when not in use CREDIT: HUSHME

It has been compared with Darth Vader and Batman villain Bane, but Hushme – a group of Ukrainian engineers based in the US – is hoping there will be enough demand from a crowdfunding campaign for a production run.

The device is set to retail for less than $200